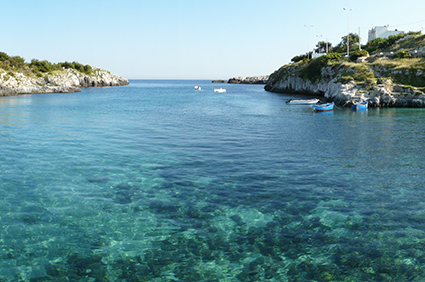 The town of Specchia is about 40 minutes by car from Lecce, listed as one of the "most beautiful villages in Italy" then named "Jewel of Italy" in the year 2013.
Just a few km from Specchia, head towards the renowned tourist destination of Santa Maria di Leuca and reach the tip of Salento “Punta Ristola” (the most south eastern part of Italy) and "Punta Meliso" that closes the Gulf of Taranto and merges the geographical boundaries of the Ionian Sea with the Adriatic. 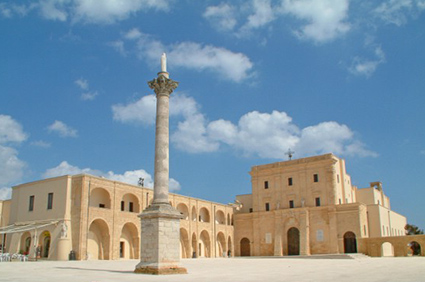 From here, head up the rocky coastline of the Adriatic coast. After only a few kilometers you can find the ciolo bridge gorge, from which, daring kids jump the dizzy heights (about 30 meters) into the deep Adriatic Sea below. You can also dive closer to the shoreline and enjoy a nice swim in a place that will undoubtedly leave an impressionable memory from your holiday.
The day continues heading north along the Adriatic coast. Then we will pass by another famous seaside resort, Castro marina, the enchanting medieval village 98 meters high above sea level. From here, on a clear day, you can even glimpse the mountains of Albania. 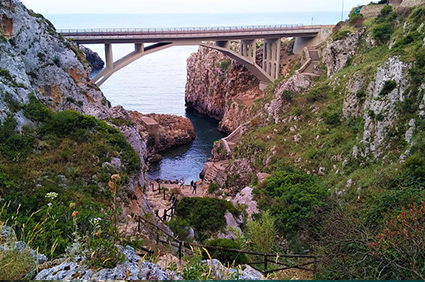 We continue up through the coastline where you can visit the "Cave of Zinzulusa", based at the scenic Porto Miggiano, and then the small pearl Santa Cesarea Terme, known for its natural spas and sulphurous waters and historical stately homes. You will eventually reach the epic bay of Porto Badisco that in addition to the culinary specialties of the sea urchin, it’s believed to be the landing place of Aeneas on his journey to Italy after fleeing from Troy.
After Porto Badisco, the choice is between visiting Otranto (but if the town has already been visited in previous tours "of the South Adriatic Coast") you can choose between a visit to the "Foundation The Constantine", a center of agricultural activity, textile crafts and workshops or the botanical gardens "La Cutura" with its 35 hectares including rare varieties of cactus, orchids and tropical plants.