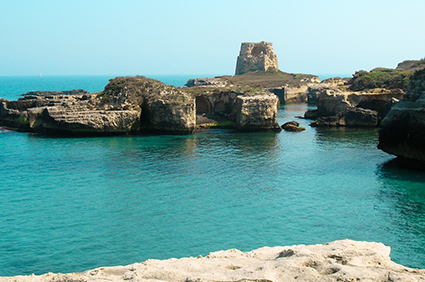 Departing from Lecce after a hearty breakfast to Acaya.
The castle is named after the Acaya family, and built by the father Alfonso. It was then made a military fortress by his son Gian Giacomo of Acaya, the latter famous military architect for King Carlo V during the reign of Naples in the sixteenth century.
From the castle we move towards the coast reaching the Adriatic seaside resort of San Foca. We then head further down the coast to the white sandy beach of Torre dell'Orso, with its "Blue Flag" awarded cristalline waters. Winning year after year, its among one of the cleanest in Europe. 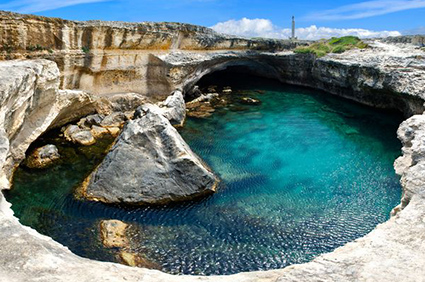 The bright ‘pine tree’ green panoramic bay is punctured by the two iconic large rock stacks in the bay called "The Two Sisters".
We continue our journey north along the coast shortly reaching the spectacular natural sea stacks dotted along the shoreline at Sant Andrea. The most impressive one is "lovers arch". Its white rock surrounded by turqoise Mediterranean water distinguishes the Adriatic like no other.
An alternative stop is at the untouched bay of ‘Baia dei Turchi.’ Another stunning seascape surrounded by white sand, rocks and Mediterranean vegetation but the place is made even more magical for its historical importance. 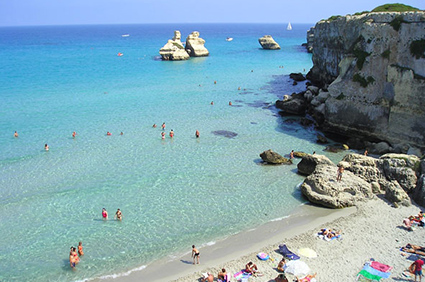 It was here where the Turkish ships landed for the subsequent invasion and "Battle of Otranto" during the fifteenth century.
The tour continues on to the pearl of the Adriatic Sea, the town of Otranto, where history, sea and Balkan winds co-exist in harmony. A visit to the historic cathedral is a must, where you can view the impressive, mediaval floor mosaic and its crypt. Also the castle is a centre of the arts housing international exhibits.

We return to Lecce for early evening.