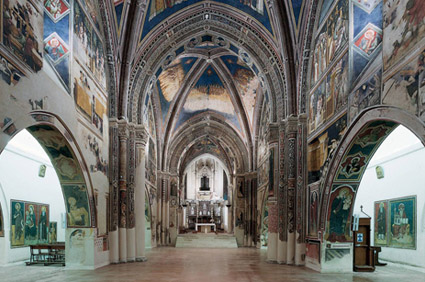 Our initial advice is to avoid (at least for this morning) eating pasticciotto at breakfast, as our first stop is Galatina, the homeland of Salento’s famous pastry. We visit one of Galatina’s founding bakeries "Ascalone" for a sample bite. Galatina not only has pasticciottos but is also the home of the majestic Basilica of Santa Caterina d'Alessandria, the date is not entirely certain, but probably built in the late fourteenth century as it’s one of the main monuments of Romanesque art in Puglia. The spectacular medieval floor to ceiling frescos covering completely the interior can only be appreciated only by visiting it in person.

With a full stomach, we reach the pearl of the Ionian sea, Gallipoli, historic town with Messapian origins, later belonging to the Greek empire along with Taranto both starred in the battle against conquering Romans and later becoming part of the colony and "municipium" of the great empire.In addition to the historical centre (a real island in the sea connected by a bridge to the new part of the city on the mainland), the baroque churches, the fishermen's houses, it is definitely worth visiting the underground oil mill, which for centuries has produced lamp oil that Gallipoli exported throughout Europe.From Gallipoli we head north to a stretch of scenic Ionian coast, where we see the ancient noble villas of Santa Maria al Bagno and Santa Caterina, the defence towers from Turkish invasions and the extraordinary nature reserve of Porto Selvaggio.

A place fortunately kept intact thanks to the courage and determination of a lady called Renata Fonte who strongly opposed the speculation of building projects that concerned the area. The historical and archaeological interest of this place is very high thanks to the discovery of some caves that date back to the Neanderthal man, the most important of all "La Grotta del Cavallo", the horse’s cave.Our return to Lecce is scheduled after watching a magical sunset where the fuchsia sun plunges into the turquoise Ionic sea, merging sea and sky together unleashing an array of spectacular colours.